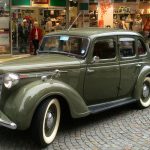 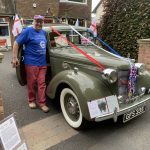 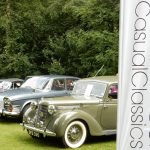 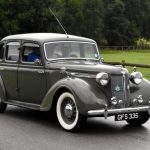 I was initially attracted to the car because of it’s colour. Had been looking for a Riley RMB but as I was being particularly piccy my search was slow. Thirties car styling is attractive to me and as the ’16’ is an upgrade of a Pre-War car, namely the ’12’ I was hooked. It was for sale in Altrincham so I thought it was worth a look. Several boxes of history came with it, including loads of receipts, letters, the names and addresses of ALL the previous owners the first of which had been Edinburghs’ Chief Constable !  I have been able to get images of every house it has been registered to (bar one) including one in South Carolina, USA ! On purchase the condition is much as you see it now but I have done many small jobs like converting the trafficators to the flashing sort and the ignition to electronic, not that you’d know. the first owner, Sir William Booth Rennie Morren CBE has quite a history himself, you should ‘Google’ him. We use the car regularly for runs and shows and even once the Big Shop. This one’s a keeper.